After our participation in the European Dressage Championships in 1999 and European Jumping Championships in Arnhem 2001 the esteemed Dutch judge Jan Willem Körner invited us to Rotterdam – the beginning of a relationship that has lasted for over ten years now.

A week ahead of CHIO Rotterdam from 17th – 21st August 2011 the third European Championships in the Netherlands, the Senior European Dressage Championships, were held in the same city and we were engaged for this event too by the organizers and Dutch National Federation KHNS. Once again we were able to provide optimum support for both dressage riders and spectators alike.

We particularly savoured the positive reactions we received from the European Championship judges who thanked us personally after the tournament for the professional services we provided. FEI dressage director Trond Asmyr also praised our work, explicitly mentioning the music, the technical preparation beforehand and the quality of the musical freestyle accompaniment we delivered. Naturally we were highly delighted to receive such accolades. 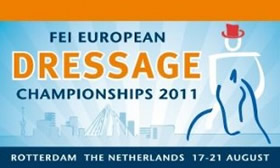